​Official Site of the 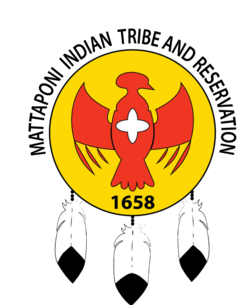 We are the Mattaponi, the “people of the river.” We have been in this region for over 15,000 years.  The Mattaponi River will always remain the lifeblood of our tribe and an important part of our culture. Contemporary Mattaponi tribal life is still based deeply in the traditions of our ancestors, such as being faithful to our treaties and living in harmony with the natural world, while at the same time we have adapted to an ever-changing life in the Tidewater Virginia.

The Mattaponi were one of the original core tribes of the Powhatan chiefdom and the Great Chief Powhatan Wahunsenakah, the father of Pocahontas, who ruled most of Tidewater Virginia when the Europeans arrived in 1607.  The Mattaponi agreed to the articles of peace with the European colonists in 1646, which was later ratified in 1677.  Since 1646, the Mattaponi people have fulfilled their treaty obligations by presenting an annual tribute to the governor of Virginia as set forth by the original treaty. Each year at Thanksgiving time, the Mattaponi Tribe presents a tribute of wild game, fish, or turkey to the Governor of Virginia, keeping with their obligations to the 1646/1677 Peace Treaty.

The Mattaponi Tribe is state-recognized and continues to maintain its own sovereign government. The governing body today consist of the Chief, Assistant Chief, and Council.

T​he Mattaponi Indian Reservation was created from land long held by the Mattaponi by an act of the General Assembly in 1658, making it one of the oldest reservations in the country.   Through the years both the Reservation’s physical size and the number of tribal members have diminished. The reservation presently encompasses approximately 150 acres, a portion being designated as wetlands.  Although the tribal roll numbers 450 people, only 75 actually live on the Reservation.

The Reservation sits on the banks of the Mattaponi River, one of the most pristine rivers in the eastern United States.  Facilities on the Reservation today include living quarters, a Baptist Church, a Museum, a Trading Post, a Fish Hatchery, a Marine Science Center, and a Community Tribal building that was formerly the Reservation school.

The Mattaponi Indian Reservation School building served as a school and church from 1890 to 1932. The school taught grades 1 through 8. The Baptist church was built in 1932, where the Mattaponi people continue to worship today. The school remained active until the 1960s, when Mattaponi children were able to attend public schools. The schoolhouse is currently used as the tribal center and pottery shop.

Since the Assembly’s designation of the Reservation in 1658, the Mattaponi Tribe has maintained its heritage and many of its customs despite strong pressures to assimilate completely into mainstream culture.

​​​The Mattaponi River bank also supplies the Mattaponi with clay for pottery. The Mattaponi people have perfected the art of pottery making. Replicas of ancestral pottery, as well as creative contemporary expressions, are made much the same way as in the 17th-century.

​Although many Mattaponi maintain jobs in nearby cities, tribal members still farm the reservation land.  Traditionally, Powhatan woman performed farming. Now, gardening, such as planting soybeans, peas, corn and other grains, is a activity enjoyed by all. The Mattaponi people also fish, hunt, trap, and turtle.

​Efforts are also being made by tribal members to revitalize the Mattaponi Powhatan Algonquin language. ​​